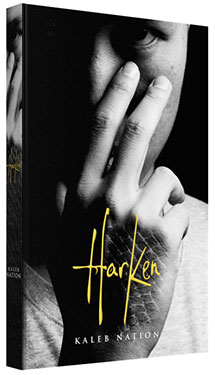 HARKEN is a very musical book. While writing its many drafts, I listened to movie soundtracks and instrumental scores to stay focused (I can’t concentrate on writing when there are lyrics because I get distracted by the words). But on the side, I kept a playlist of songs that have the same “feel” as the book — mysterious, conspiratorial, dangerous.

After HARKEN was released, other artists started to write their own original songs about the book. It’s thrilling when other people read something I created and are inspired to create something new. You can hear some of them (and my playlists) on this page.

Get it on iTunes here

Some of the songs I listen to while I’m writing aren’t available on Spotify, so here’s the full list:

Reprise (from The Door In The Floor) – Marcelo Zarvos & Peter Vronsky

My Name Is Lincoln – Steve Jablonsky