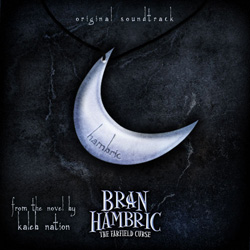 Yesterday, I was cleaning up my computer and found an old song concept from months ago that I never finished. I had been having loads of trouble with a piano line in the song and had finally just given up. When I found it again, I realized the problem with the piano was that the piano just didn’t belong — I took it out, and suddenly the song came together.

A few hours of not-studying-psychology later, I might actually have another song to add to the Bran Hambric soundtrack (I promise I’ll release Astara soon, I’m almost done mastering it). If I decide it’s worth finishing, I’m thinking this new one will be for Shambles (he’s in the preview chapters if you’ve read them). Here’s a clip from the middle:

For this one I’m going for a very emotional, brooding sound that’s different from the rest of the soundtrack: this overall feeling of a mentally alone and tortured creature who can’t escape the voices that haunt him from within.

Speaking of the soundtrack, I’ve noticed that there are quite a number of people who want a Bran Hambric soundtrack on CD. A day ago, I posted on Twitter that I was considering it, and within 5 minutes I was inundated with replies from all over the world wanting to get it somehow. (In the midst of showing a spoof of the CD art, I might have inadvertently leaked what we might be using as the Bran Hambric logo…see what unexpected insider information you get from following my Twitter?).

My original idea for the soundtrack was to give the songs away with the book somehow, but it appears that at least with the first edition of THE FARFIELD CURSE, there will be no CD attached. Sometimes, for books that sell particularly well, there will be deluxe editions with extra material, which is the most likely point when a CD would actually come with the book; but as of now, the only way I will be able to get CD’s to the people who want them is to sell it really cheap from a Print On Demand service (most likely LuLu.com). Nothing is set in stone, but my thoughts on this plan are:

Since Twitter isn’t really a good place to see a show of hands on who likes the idea and who doesn’t, please do comment on this below. Your feedback on this will really be the deciding factor on if a Bran Hambric CD actually does come into being, because at the moment I’m indecisive.

By the way, I’m testing out a new and improved commenting system on my blog. Now, you can reply directly to others comments, and see my replies to you all in one place! Hopefully you all enjoy it 😀