After a while of being part of the Twilight fandom with TwilightGuy.com, I noticed a huge and enormously irritating trend of obsessive fans or attention-seeking creeps creating fake Twitter accounts for movie stars, and acting as if they are the celebrities themselves. To my greatest annoyance, these fakes gather lists of all-too-eager celebrity-chasers, sometimes 20-30,000 followers thinking they are following the real Robert Pattinson/ Taylor Lautner/ Miley Cyrus, etc. 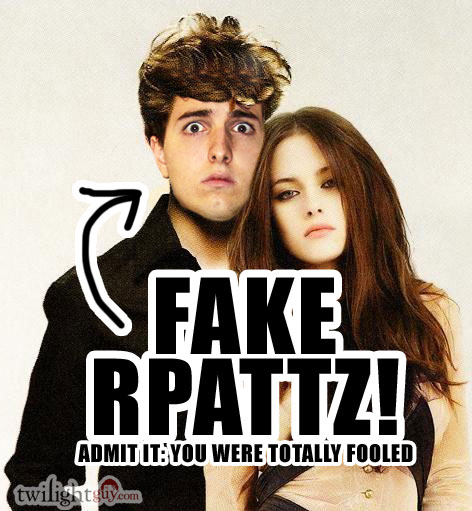 This morning, I was amused greatly when ‘Robert Pattinson’ sent an @ reply to my Twitter account saying “@KalebNation geez i talked to u on the phone =O” from an account called @BobbyMcMurphy (the Fake Rob was referencing my interview with the Real Rob). It struck me that this person had actually fooled 170 people into thinking he was the real thing — and even worse, was chastising other Robert Pattinson accounts which had already admitted to being fake! Not surprisingly, when I called the fake Rob out on my own Twitter, he suddenly stopped following me. Oh epic laughs.

Before I go on a rant on how crazy someone must be to actually follow a Robert Pattinson on Twitter who can hardly write a decent sentence, I must admit that I was once hoodwinked myself by a fake Stephenie Meyer account (then, twitter.com/stepheniemeyer, now suspended). This is in spite of me knowing Stephenie, Stephenie’s publishing people, and many of Stephenie’s fandom-gurus, none of whom had ever mentioned any ‘real’ Twitter even once. I thought I was poser-savvy: but I WAS STILL TRICKED. Also, just a few months ago, I myself, in all my unknown-ness, was plagued by a smart poser who went as KaiebNation (in Verdana font with a capital ‘i’, that looks exactly like KaIebNation). This fooled my friends and even my own brother (but look what happened to Fake-Kaleb). To save you from similar embarrassment, I’ve made this 10-item checklist of How To Spot A Fake Twitter:

1. If the account is a mixed up spelling of an actor’s name that appears to be the name but isn’t (for example, RobertPattinzon or [email protected]) it is almost certainly a fake (exception: Rachelle Lefevre’s account).

2. If the Twitter is not linked on the official website of the actor (or on a reliable entertainment website) it is probably fake. NOTE: There is a HUGE RING of FAKE Twitter accounts, that actually create fake Myspace pages just to link to the fake Twitters. Make sure it is the real website!

3. If the Twitter only links to press photos of themselves and never any personal photos, it is probably fake (unless they are very obsessed with seeing themselves Photoshopped).

4. If the Twitter discusses their personal relationships when said relationships are currently HUGE NEWS in entertainment (for example, if a Kristen Stewart account says ‘I am not dating Robert Pattinson‘). Stars usually are smart enough not to discuss this on a Twitter (this rule is not always reliable).

5. If the Twitter talks in Chatspeek or in some other broken form of English. This is especially true for British movie stars, who usually don’t write stupidly.

6. If the Twitter links to other accounts that are obviously fake (for example: on @BobbyMcmurphy, a fake Robert Pattinson account, the poser links to @kristensss, saying that Kristen Stewart told him it was her new one). Twitter-fakes will make a huge network of poser accounts and have them ‘talk’ to each other, to make them appear real.

7. If the Twitter ‘talks back’ to their haters or other posers (oh the irony!) it is almost certainly a fake. Celebrities get this so often they usually don’t reply.

9. If the Twitter ever, ever, EVER links you to something that is simply a bunch of ads, with no content. STARS DO NOT NEED ADVERTISING MONEY, which is only pennies.

10. If the Twitter claims to be Robert Pattinson, it is fake. Currently, this is a good rule to stick by.

With the still-in-progress feature of Verified Accounts, it will soon be much easier to figure out who is real and who is not. BELOW you will find the REAL TWITTER ACCOUNTS of the stars of TWILIGHT and NEW MOON — these are confirmed by the star’s management, via the Twilight Lexicon:

Here’s a quick list of FAKE accounts for the Twilight stars that have not yet been suspended. If you’re following any of these, I suggest you spit in their eye (I mean, un-follow them)

@TheRealCelebz — a huge hub for trickery! They are fooling hundreds of people into thinking they are an authority on who the ‘real’ celebs are. Do not be a sheep and believe everything you hear.

As of now, Stephenie Meyer, Kristen Stewart, Robert Pattinson, Taylor Lautner, Dakota Fanning, JK Rowling and My Granny do not have Twitter accounts.

If you have any others that are fake, or are wondering if someone you are following is real or fake, put it in the comments so I can add them!

ADDED: The fake Robert Pattinson I mentioned in this article just locked their account. Victory! Good thing I kept a screenshot.