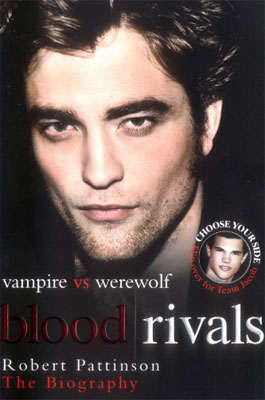 I was told that I’ve been mentioned in the upcoming book “Blood Rivals: Vampire vs. Werewolf: Robert Pattinson and Taylor Lautner: The Biography” the title of which, if my eyes do not deceive me, contains every buzzword intended to get Twilighters to buy it, except “shirtless”. To be honest, I don’t actually remember saying the things that I’ve been quoted as uttering, but as last year I did so many of these interviews, I don’t suspect that the words have been fabricated. They do sound quite good so I wouldn’t mind if they were entirely the author’s invention, though I would have preferred he (yes, a male author of a book about Rpattz!) include some of my favorite words, “horticultural” and ‘abysmal’ and ‘loathsome’, at least once in the quote *.

When it gets to the point that you’ve done so many interviews in the space of two years, you start to play a little game of “Where-Did-They-Get-That-Quote ** ” which is far less entertaining when the article quoting you casts you in a less than favorable light, but fun in cases like these where you can’t honestly remember speaking to this author. My guess is that I said this quote while I was in Forks for the Summer School In Forks convention. I don’t think the author was actually there, but I have a feeling that this quote was taken from the Twilight In Forks documentary, in which I have a strange recollection of using the word ‘logging’ (yes I have a habit of remembering when I use unusual words, even years later). I also wonder if he might have been at Twicon getting quotes, as that was such a whirlwind I could have said anything and not remember it.

I’m not quite sure where this book fits on a bookshelf, as it can’t be read or classified until it’s out, but I think it could occupy the same space as “Robert Pattinson: Eternally Yours” in which I also had the unusual honor of being mentioned as well: When I started TwilightGuy.com, I threw a hastily-written biography onto the page, with absolutely no thought to a future in which it would be quoted endlessly on television and in recent days, in published books. Now that I look back, if I had simply added some “golly-gee!’s” and “me-oh-my-oh!’s” I might have sounded like the true-to-life, fresh-out-of-my-parents-house teen guy I was:

“Golly gee willikers! I’m trying to find out what a girl is, and why every one of these unexplainable creatures in the world is toe-tappin’ obsessed with them Twilight books by Stephenie Mayors! ^”

Lesson learned: never post anything to the internet without first considering that it might be quoted in a published book without your knowledge and/or permission and/or opportunity to edit. DOING SO WILL COME BACK TO HAUNT YOU ONE DAY.

Either way, I’m very thankful he decided to include me in his work, as it’s always thrilling when your name is in four published books, while you’ve only written one of those — especially considering that being mentioned in real non-fiction books means that someone thinks I’ve made some mark, albeit a small one, on a bit of fandom history. Surely the upcoming “Blood Rivals:…”, will be a wonderful addition to Books-Bearing-The-Face-Of-Robert-Pattinson, of which 63% of my readers surely have a secret home collection 😀

*and a new favorite: “lavatorial” thanks to my introduction to the word by good friends over dinner.

** not to be confused with the dissimilar game of “How-Do-I-Swim-This-Moat”, which requires alligators.