Things I Have Learned As An Author

I remember very distinctly how it felt to be unpublished and wonder what it’d be like when I got to the other side. Since I started writing when I was very young, I approached the publishing machine with an even more child-like awe than most other, older writers around me, staring upwards from far below and hoping that one day I’d be tall enough to reach the buttons. 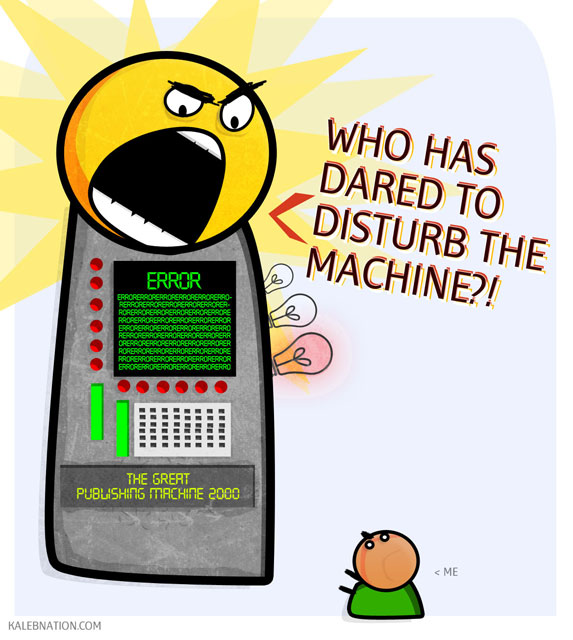 Me, In The Style Of The Oatmeal

I think I revered authors as some type of alter-species, superior in every way. Surely, I imagined, published authors would live atop gigantic buildings in New York, and type and type and type book after book, with a growling publicist coming over daily about interviews, and golf with their agents on Saturdays.

Now I am here. I’m twenty-two years old, with two of my published books beside me. I am at the same desk I’ve had since I was fourteen, surrounded by no less than eight empty water bottles, notebooks and scribbled-on papers strewn in piles everywhere, an empty tin of Eclipse mints I’ve nervously chewed my way through in a week, a tangle of headphones in knots beside me, eyes bloodshot from staring at this abysmal computer monitor past 3 AM last night, and sitting in my pajamas. If I wrote my stories on cardboard, you could easily mistake me for a hobo.

This is how writers write. I learned as soon as I moved out and became a full time writer that to really do something in writing, you’ve got to throw everything in to writing. You’ve got to be so immersed in a story that you forget to shower, you forget to eat, you forget that it’s 4 AM, you forget that you haven’t paid your internet bill and that’s why Pandora suddenly won’t load the next song on your writing playlist. You stay up writing. You go to bed writing. You get up again and brush your hair back with your fingers because you want to get back to writing and don’t have time for a brush. You do have time for a brush, but taking two minutes to get it would seem like eternity. This is why your clothes sit in the dryer for a week — why put them away when you can just pull them out when you need them, and have five more minutes to write?

I’m hardly one of those people who can be considered an established author yet. But after a year of living like this, I’ve picked up on a certain amount of things, including:

– Do not wear a suit coat to a book signing, and never ever wear a hoodie over a button up,

– Do not wear dress shoes to BEA if you value being able to stand up,

– Carry two copies of each of your books in your luggage for when you find yourself on a plane beside the producer of The Spiderwick Chronicles,

– Make a code system for when you autograph things: blue ink is first book tour, green is second, a dot means you met them in person, etc,

– Make sure your thumb is not covering your book title when taking photographs for magazines,

– Do not say you know another, more famous author if you don’t want the entire interview turning into trivia about said author, and the only quote used in the interview to be “Why yes, I am good friends with…” so that you sound like a name dropping toad,

– When on tour, make sure you arrive at your hotel before your publicist leaves the office, because inevitably your reservation will have been eaten by glitch maggots,

– Learn the art of the Secret Book.

When you are a writer with no publishing contract, no agent, and no possibility of something you tweet being retweeted endless times and somehow reaching your publisher and causing them to ask ‘A new book? Can we take a look at it next week? You haven’t finished? Alright, two weeks?” then there is no fear of talking about your novel on blogs or online. You do not need the Secret Book. Anyone with a good DNS search will know that I launched BranHambric.com in 2005 — four years before I was even published. I was so immersed in this story that I couldn’t resist sharing it with anyone I could.

But more importantly, when you’re unpublished, you have the freedom to just write. You can let the ideas simmer in a pot of word stew, changing the title hundreds of times, changing the main character from Freddy to Sue, splicing chapters 3 and 4 and eliminating that awful part about the zombie leeches altogether. You have freedom to revise and change without confusing anyone, and when you suddenly realize that the whole thing needs a rewrite and it’s going to take you six more months, you CAN do that because there is NOBODY waiting on you.

After you become published, however, things immediately change. You have a publisher who wants a new book every once in a while. You have readers who, in their awesomeness, send you daily emails asking for updates on when the next novel will be out. When you accidentally tell readers that you’ve had an awesome idea and you’re calling it “Sammy Squid’s Riotous Undersea Adventures With Abraham Lincoln” and then later decide that a Hoovervillian is far more interesting than a Gettysburg Gun, suddenly everyone implodes into a cloud of confusion.

Therein lies the art of the Secret Book.

Anyone who follows a multitude of authors on Twitter knows of this. Authors hashtag their projects with things like #FantasyIdea or #damnhistoricalnovel or #SecretVampireRomanceProjectSetInWashington. They tweet about finishing chapter twelve, or beg Twitter for a good British male flight attendant’s name, or about how they’ve fallen asleep at their desk and dreamt of throwing phosphorus on people because they’re just that exhausted.

But never, ever, ever do they say the Title. Or the Plot. Or the Main Character’s Name. To say such would violate the code of the Secret Book. To reveal those while still writing would immediately tie the writer down to keeping these things inside the story, and what a writer needs least when writing is anything tying them down to something in the first drafts. How many Harry Potter fans waited for years to see ‘scar’ as the last word? I wonder how many hours it took Rowling to get the strength to change that one tiny part, and how many versions of sentences did she go through trying to keep ‘scar’ as the last word just because she had already told people it would end that way.

Because even though writers know readers will understand if we have to change something, there will still be that nagging voice — what IF someone is most looking forward to seeing Abraham Lincoln under the sea? What IF I’m insane and this is awful and it never gets published, and all of my readers think that I am an absolute miserable failure of a writer who will never amount to anything? You have the freedom to toy with an idea when nobody is watching, until you’ve got it perfect.

But those of us not protected by publicists whose job it is to keep our mouths shut — we can’t keep it all inside. Writers want everyone to hear their idea. We’re too excited by it, to entranced by this world and the prospect of other people enjoying it too. That’s why we search out ways to secretly spill out bits of it. Where will my words be most untraceable? Least recordable? Least getting-me-into-trouble-able? Will anyone know if I just call it my #SecretProject? Because, most of all, like anyone who writes, we want people to read it. We want them to fall in love with it in the same way we have.

Inside, I am still the same as I was before I was published. Outside, I act as professional as I can in my pajamas.