My Night At The Breaking Dawn Movie Premiere

Stephenie Meyer and Me

Earlier this week, I was invited to be on the red carpet of the Breaking Dawn movie premiere in Los Angeles. It’s impossible to put into words how thrilling (and caffeine-filled) my night was while spending time in one of the biggest film franchises in the world.

For those few who don’t know, The Twilight Saga: Breaking Dawn is one of the most anticipated films of the year. As the first of the two-part final installment in the $2.5-ish billion franchise, the fans know they’re up to their final chance to be a part of the phenomenon. Over 600 people camped out for 5 days, braving the cold and rain in the hopes that they’d be placed near the red carpet when the event finally started, to see their favorite film stars as they would arrive.

A film premiere is a little different on the other side of the barricades. When you’re there as press, you are there for the stars too, but you have a job. Your purpose is to CAPTURE them, to find ways to take the stars from the carpet and send them to their fans all over the world with photos and videos and as many tweets as you can possibly type while simultaneously holding microphones, cameras, lenses and your notes. As press, your job is to be the eyes and ears of the millions of fans who could not be on the red carpet with you. They need your interviews like food.

I remember the moment the limos and sedans started to pull up, and you could hear the shouts of the crowds that lined the streets, people held back by walls and bodyguards. You can really tell who is getting out of the car based on the decibel level of the crowd noise.

The Source Of The Screams

The door will crack open, people will shout, quickly silence — it’s just a Kardashian. The doors of another will part, people will scream for twenty seconds — it’s Peter Facinelli. Like the Pope, the star will sometimes spread his arms open to the crowd, and the shouts will continue dutifully until his hands are finally lowered.

It’s easy to think that’s the loudest it gets when star after star arrives to similar receiving sounds. Jennifer Love Hewitt. Cody Simpson. Some guy who was famous in the 80’s that you can’t remember the name of.

But then Taylor Lautner appears. Oh the screaming. The screaming. The SCREAMING. Imagine a wall of screams and running straight in to that wall. It is like the roar of a high-pitched tsunami sweeping over a city of eagles.

The Target Of The Screams

Then the crowd is really going, the shutters on the cameras are snapping, the press people are calling for attention. Then the premiere has really started. Then you really feel like you’re in the middle of one of the biggest Hollywood events of the year.

Because honestly, there are few things more exhilarating than film premieres where actual honest-to-goodness famous people show up. Red-carpet-goers are constantly surrounded by hoards of publicists who (for reasons that fly entirely over my head) do everything in their power to block their entrusted stars from any and all possible publicity generators (AKA, me). It’s almost a game to get stars’ attention, to convince them to step over and answer YOUR question. You lean over the metal fencing and shout in hopes you’ll get an answer. Sometimes the loudest wins. It’s worth the work: thirty seconds with Kristen Stewart is about 2 million views.

I had a wonderful night with the people of the Twilight franchise.  The producers of KALEB’S NATION were also there and we got to spend time together at the afterparty. I sat in the theater a few rows from the lead star of the film, five seats from a Kardashian, one row back from the producer. I saw many of the friends I only see once a year at these events. And I slept very well that night when the caffeine crash finally hit. 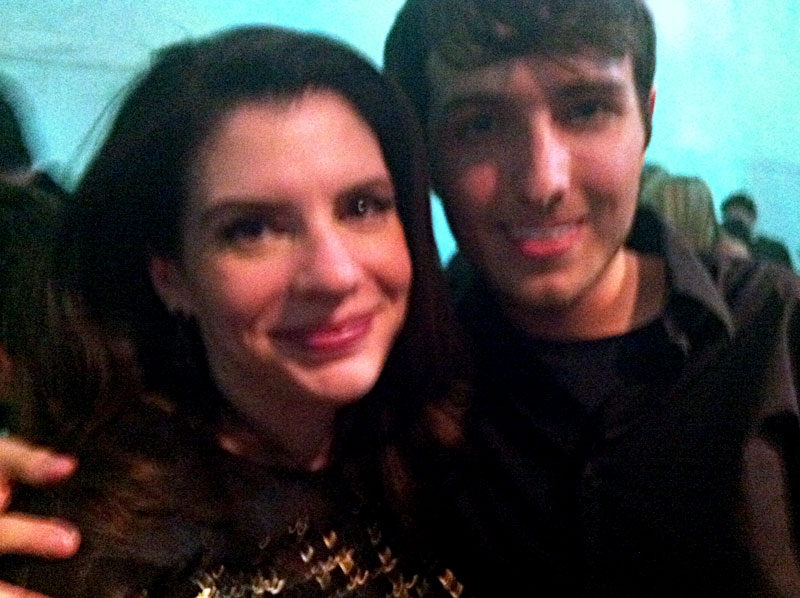