Last night, during the live BlogTV release party for Bran Hambric: The Farfield Curse, the enormously awesome BranFans did the impossible yet again: 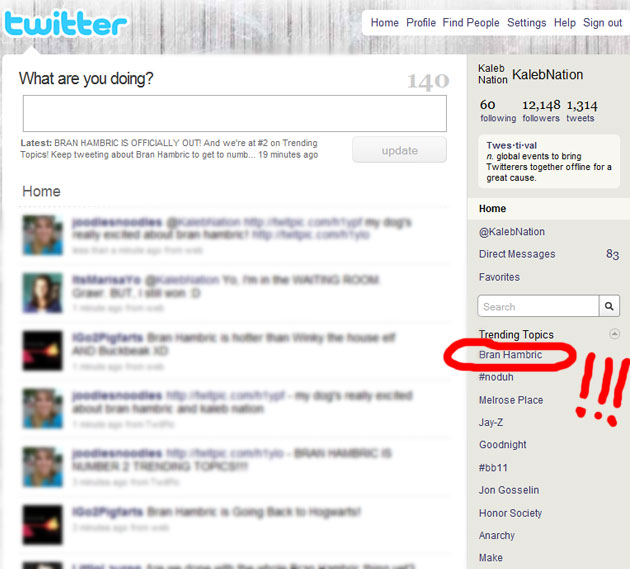 Yes, Bran Hambric was the #1 Trending Topic on Twitter.com for over an hour. BranFans topped the likes of Jon Gosselin, Jay-Z, and even ‘goodnight’ (a nearly impossible feat on Twitter in the evening!). Not only that, but we knocked “The Beatles” off the trending topics entirely!

How’s that for awesomeness?! I was freaking out just seeing it on the trending topics: I never even IMAGINED that BranFans would be powerful enough to actually TAKE OVER TWITTER! There’s no better thing in the world for this day than to see an army of epic people getting it all the way to the top, so a huge thank you to everyone who helped get it there 😀

Not only that, but I see that Bran Hambric is on the front page of Borders.com:

Hooray for Borders! I’m already hearing stories of bookstores putting the book on shelves and it selling out this morning, so if you really want a copy and didn’t pre-order, you might want to head out there early before they run out. If the book is gone before you get there, the stores will restock it, but it might take a few days!

It’s super early in the morning but I had to post that up for everyone who missed the show. I’ve got so much stuff to post about today, epic day of all epic days, but I have a Radio Disney phone interview in two hours and I’m super sleepy (and I don’t want to slip up and say crazy things like “OH YES Zac Efron could TOTALLY play as Bran Hambric” or something equally ridiculous). Going grab some more sleep and I have more blogs later! –Kaleb