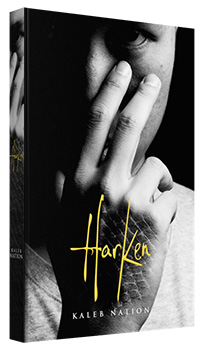 HARKEN: The Novel by Kaleb Nation

After surviving an assassination attempt, Michael Asher discovers that he is at the center of a worldwide conspiracy higher than any earthly power. A supernatural organization with authority over world leaders, celebrities, and the wealthy desperately wants him dead. Tumbling into a web of international secrets, Michael is forced to fight back and dig up the truth. Who is the puppet master? And how far into the maze can he venture before he is lost forever?

–I’m so excited to finally share my book with you. You can buy HARKEN now for $2.99 on your Kindle (or using any of these readers). HARKEN will be available on Nook and other eReader devices within a few weeks.

From the first tweet to the final draft, HARKEN has been a wonderful journey leading to this day. The stories of Michael, Callista, Thad and the others are now yours too.

I hope you enjoy HARKEN as much as I enjoyed writing it!

P.S. For updates on the HARKEN sequel, be sure to watch this page.